I had a few days I could take off work, and needed a good solo ride anyway, so figured I would try out a few things that had been on my list for a while.
First thing on the list to accomplish was riding a bunch of gravel roads that are near a lot of the rides we do anyway (particularly on the annual Lillooet trip.) I see a lot of these roads while we are out on our training rides, and I’ve ridden bits and pieces of them. It seemed like a good challenge to string these pieces into a route and do the whole thing in one shot.
The second was to try out some gear I've been meaning to check out for a while.  Notably, I was looing forward to riding the Salsa Warbird on more gravel, loaded with camping gear on the new Compass 38 extra light tires.  Forgoing the stove and other comforts I ended up with a fairly compact setup.

I was also hoping to give my Alpine hammock a go.  Practice run in the park: 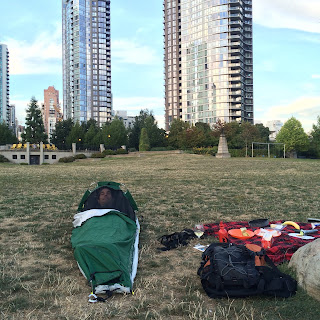 Day 1 was a typical route out of town.  A couple of required stops, including finally making it into Wentings in Mission to use up a gift certificate from a race around 4 years ago.

And finally, dinner at Fat Jack's and sleep at The Mighty Fraser 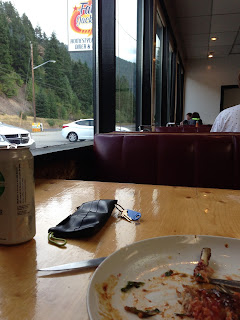 The second day was to be a bit more ambitious.  The original goal was to ride the west side of the Fraser, but early morning showers in Boston Bar and getting to the ferry in Lytton during a 1.5 hour coffee break put a stop to that.

The day ended up being hard enough without that extra gravel.  I continued passed Lillooet toward Carpenter Lake (one of the standard mighty training camp rides), intent on climbing and descending Mission Pass to Seton Portage.


I carried all my gear because I thought I would be camping in this section, but I pushed through the day to make it to Gates Lake and our friend's cabin, arriving just before sunset.  So, actually didn't get a chance to test out the bivy after all...

And, of course, when you're in the area.