As I write this, the rain pounding down outside the coffee shop in Duncan, BC, I am amazed at the good fortune we had this past weekend riding the ridges of the Tofino Inlet and Deer Bay. Weather is fickle, and that’s just fine (where else would we get such amazing green forests?) but it was certainly a pleasant surprise to have clear skies, incredible views and the luxury of dry clothes for two days during our bikepack up to Virgin Falls. 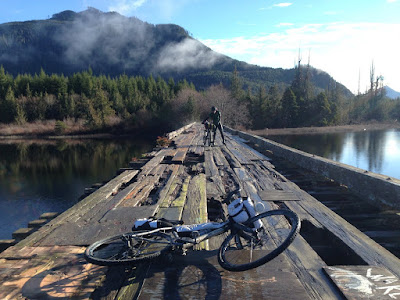 Clay (@stuckylife) first proposed the idea of a winter bikepacking trip in November, while the CX season was still finishing, and we were all looking forward to a bit of time off from racing and perhaps instead some long miles of logging roads and gravel – unstructured, and scenic. 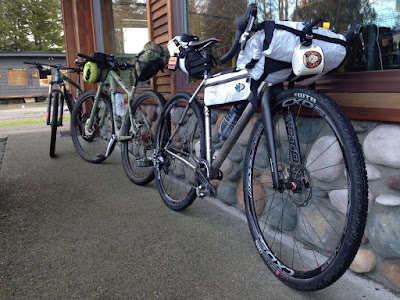 It had been a plan to hit a winter bikepack for over a year; the unfortuntate collar-boner incident last year had dashed my hopes of doing a late winter/early spring trip in 2015 (though I had been sure to pack and plan like a compulsive). 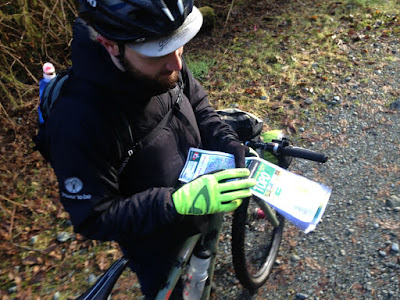 This aside, Clay was the real driver of this adventure – he’s got the knowledge, and damn if he doesn’t have the will to get these kinds of trips done. He found that there was a small cabin/hut built by locals that we could use for our overnight, meaning we could keep out packing light, and sleep indoors in the outdoors. With a solid plan, riders opted in, and we had ourselves a crew of 5, Clay Webb, Terry McKall, Rob Parkin and Rory O’Connell who shreds with Performance Bicycles. 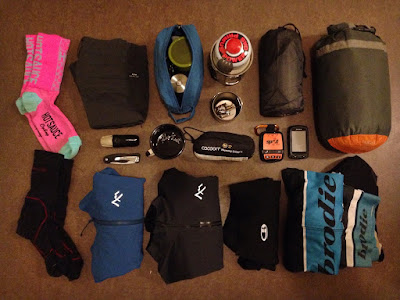 With Ranger Clay leading the charge on local knowledge, I made sure to pack the backups – our SPOT tracker, some backup friends in case of things, and the extra gear (read: lights) in case our planned cabin outing turned into a return mission in the dark.

Clay, Terry, Rob and myself hit Ucluelet the night before the venture, staying in the hostel in town. We were told there might be some Karaoke worth visiting, but apparently a surf town in the middle of winter means there are only 2 people at karaoke at 10pm – the bartender and the DJ. We kept it civil, despite the desire to cut loose, and were up bright and early on Saturday to begin the adventure. 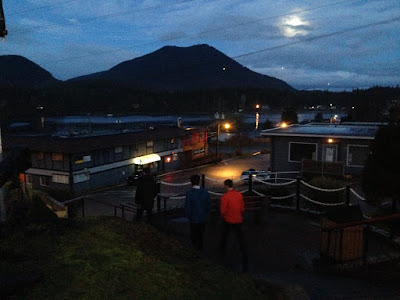 We pulled the bikes and loaded our packs – I’d decided on the Brodie b-team Ti Romax as my weapon of choice with 40c WTB Nanos and an array of Porcelain Rocket bikepacking bags that I picked up for the Oregon Outback. Rob and myself were the two on CX bikes, while Clay, Terry and Rory rode their hardtail mtbs. 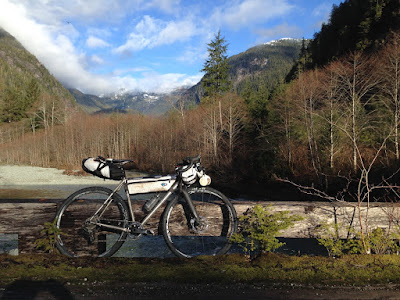 Sufficiently caffeinated we began the roll out of town. First a few KM of paved trail, but soon, we were on the West Main. We took a quick detour to see the infamous Kennedy River Bridge, the rainbow bridge that was home to protests in the 90’s. It’s a little worse for wear, but still leads directly to the most beautiful of places. 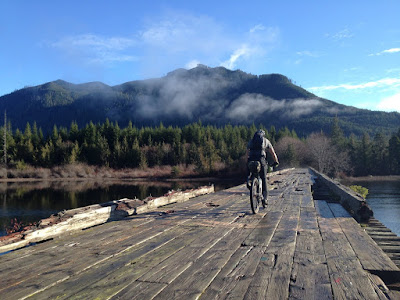 On the road again we shared the logging road with just a few trucks and pieces of heavy equipment. Our first 20km of the journey were undulating and well packed, just a few hard potholes. 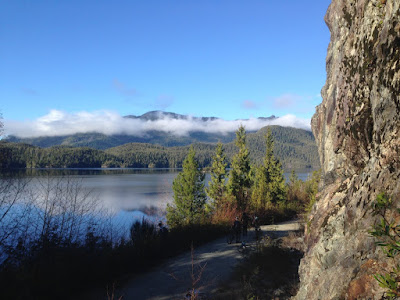 As we diverted on to Deer Bay Main, the terrain got rougher, steeper and required a little hoofing. Loaded bikes make for an interesting experience on steep grades – especially on race gearing.

The spectacular views of the Tofino Inlet peaked out on every corner and we continued to cross bridge after bridge over creeks and falls. The sunlight filtered onto the path and broke through at each outcropping to bathe the rocks and the riders. So rad.

A deep washout in the road meant that we cyclists could pass, but it was unlikely we’d see any other people (especially the kind in vehicles).

The pitch during the final climbs to Virgin Falls were very, ah, challenging, and the increased grade, as well as loose rocks, meant lost traction and some walking. 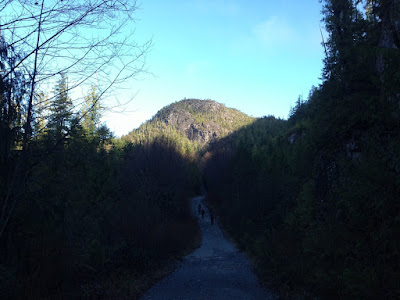 53km in we hit the falls. Amazing. The bonus of visiting snow-fed water features in the winter are that they are huge. It was a sight, and we took many, many, dumb photos.

The trek back to the cabin, which was on a spur about 3 KM back from the falls, was a it confusing – leave it to 4x4 drivers to give confusing distances and directions. We found the cabin, and though the vibe of the place was pretty murdery, we were happy to not have to do a quick nighttime retreat.

Campfire made, and whiskey drank, we crashed out in the hut. I was happy to have only one mouse try to sleep on my head all night, and we were sure to keep the snoring in check.

Coffee outside in the morning was well worth the questionable sleep. It’s always awesome to get the pot boiling and a few strong cups in before the ride. 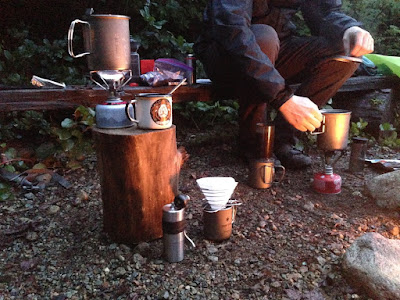 The roll back was fast – I was the victim of my own hoon-ing at some point and slashed a sidewall, likely in our deep creek crossing. Booted with 2 pieces of duct tape and a $20 CAD ($14.17 USD) bill, we kept rolling. And ate candy. 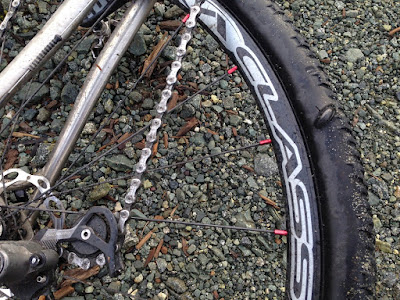 All told we railed out two strong days in the saddle, 106KM, slept in a creepy shed, drank a bunch of coffee and had a rad time. Thanks guys, such a good two days. 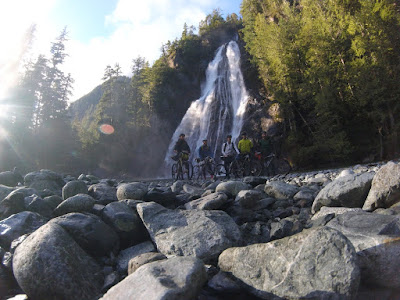