Today's Pirate jaunt involves the annual Ride Around Mount Rainier in One Day.   It's a little 240km ride with 2700m climbing.  Throw in some 30 degree weather and you have a decent day's effort. 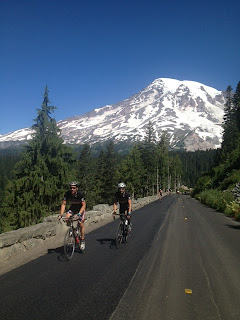 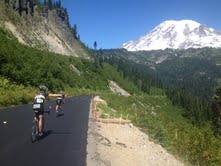 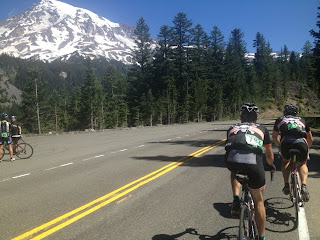 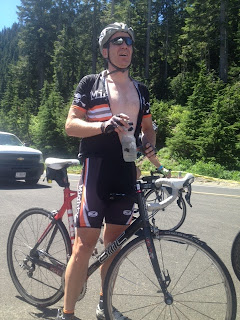 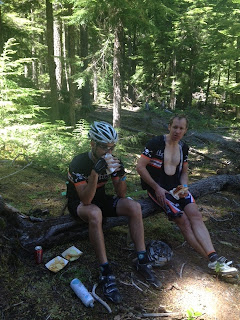 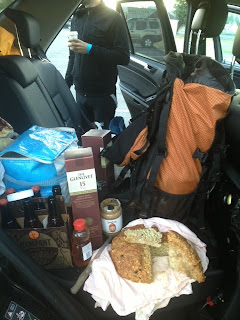 This adventure brought to you by fine Northwest IPA, good Scotch and Mark's homemade bread.

Posted by savage at 8:40 AM No comments:

Mark and Rob loaded up the truck for a carpool down to one of the hardest stage races around, the Cascade Classic in Bend, Oregon.

Mark was racing in the Cat1/2 40+ field.  On the last stage, a hilly circuit race, he finished 4th in a strong break that put 4 mins on the field.  This moved him up into 8th on GC.

Rob was racing his first Cat 2 race and did well finishing in or near the top half of the field daily and 45th overall.  A good first experience as a Cat 2 over a tough, fast wknd. 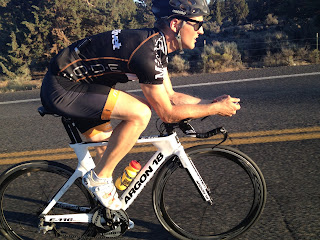 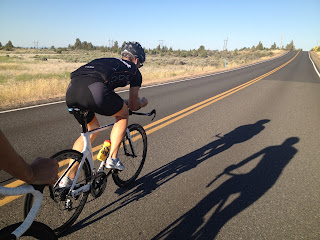 Teammates critiquing during the tt recon. 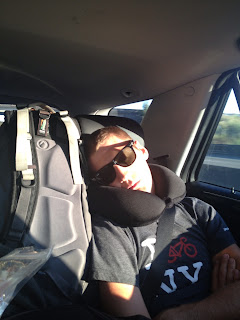 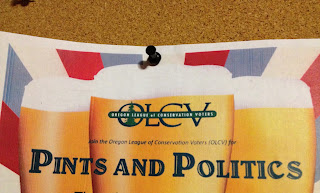 Bend, Oregon and road trips in general.
Posted by savage at 10:39 PM No comments:

A Busy Month of Racing

For the past four weekends, I’ve had a chance to do a lot of racing of all different types. There was a weekend of road racing, a weekend of mountain bike racing and they were bookended by weekends of track racing.

For June 29th and 30th, I headed to Trackfest in Victoria. The weather was hot and spending it on the concrete velodrome in Victoria made it feel even hotter. The weekend was a success. I ended up placing 2nd in the women’s omnium. Highlights were a 3rd place overall finish in the scratch race in a combined field of women and masters men and winning the Individual pursuit, taking 6 seconds off of my best time. 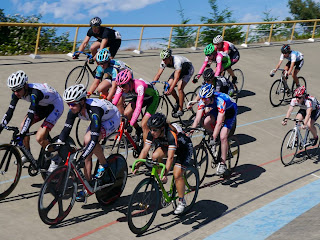 On July 5th – 7th, I raced the Tour de Delta. Despite borrowing some fancy wheels from Mighty, these were not my best races. I’m not sure if it was nerves, the fast pace or just not feeling great, but I got my butt handed to me. Still it was a great experience and I’ll not soon forget how I got to line up and race against the best women in the world. 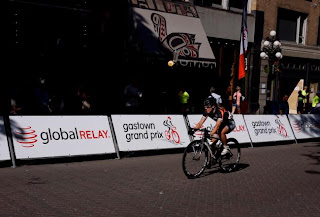 Having just started mountain biking at the end of last year, I decided to race the Cardiac Classic at SFU on July 13th. I’m not the best mountain biker, but I was actually looking forward to the uphill because my fitness is better than my skills. My race plan was to let everyone else start ahead of me on the technical downhill and then pass them all on the uphill. I decided to do the one lap race because the two and three lap races included an extra technical section that I thought was probably beyond my ability. But just because I’m a glutton for punishment, I rode to the race to get an extra trip up Cardiac Hill. So the gun went off with a mass start and we rode a loop around SFU on the road. We got in the trails and I positioned myself last. Despite only going down these trails once on the Thursday before, I found that they were easier than in practice. I think I was making good time, I could hear people just ahead of me and then, poof, I was flying through the air. Despite practicing the drops on the Lower Snake trail multiple times on Thursday night, I think I just forgot where I was on Saturday and I launched myself over them. Now I was glad that there was no one behind me because I was laying in the middle of the trail. I got up, re-adjusted myself, shook off the layers of dust that had accumulated on my clothing (hey, we don’t want that Mighty logo covered up) and got back on. The next section was the Jim’s Jungle and North Road trails that I have actually ridden many times, so I was much better here and I think I made good time. The longer course people were coming up to me here, and I managed to mostly hold my ground, though I let Basse pass me. Teamwork! Then the trails were done and the uphill started. We rode up the less steep Trans Canada trail, then up Cardiac Hill. I think I made ground on those hills, keeping pace with my friend Bruce and passing some people. Unfortunately, all but one of the people I passed were racing multiple laps, so overall I was second from last. I guess I can only improve from here. Anyone want to go mountain biking? 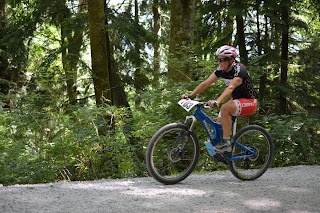 This past weekend, I got to race at the Marymoor Velodrome in Redmond Washington. This was by far the best weekend, even if they weren’t my best results. The women’s field has 40 entries and a waiting list. The field included multiple Olympic medal winner and World Champion Sarah Hammer and Olympian Rushlee Buchanan. Records were shattered. See the writeup at here. On Friday night, the women started with a Miss-N-Out race. This is the race where, each lap, the last rider across the line gets eliminated from the race. This is actually one of my better races as it favors tactics over strength. Lap after lap, I managed to find the right position and avoid sprinting at the back. When there were just 11 riders left, and with the pace high, I made a critical error. I avoided sprinting to the front before it was too late and hoped that my position down below would be a good one, but going into the last turn I knew it wasn’t and I got eliminated. At 11pm that evening, when I am usually in bed, we started our 8x5 points race (which actually got shortened from a 10x5 due to the late hour). This meant that there were 8 sprints every 5 laps and points go to the top 4 riders across the line each lap. I stayed near the front and sprinted with the best. Each sprint I fell short of the top 4, but I was aggressive and got it into some splits, but we always ended up in one group. On the final sprint, I gave it one last kick and crossed the line right at the front, but just out of the points again. Overall, I came 16th, but I was happy with how the race went as I was aggressive and felt great the whole time. Too bad the race was shortened. I could sense others getting tired and I’m sure I could have scored in the last two sprints. On Saturday evening, I just had a 20 lap scratch race. There were so many women in this race and I found it more difficult to move around. 20 laps didn’t seem to be too taxing on anyone and the pack stayed tightly together. I had planned an attack with my friend Melanie, but we could just never get in the right position at the right time. In the end, we were left sprinting it out and I ended up 16th again. So despite some lackluster results, these races were fun, fast and aggressive and the event itself it top notch. The people who make the race happen do an outstanding job, there’s a great beer garden and a pizza party at the end of the race, there were thousands of spectators located the entire way around the track and there are great races to just watch. I hope to make it to the Marymoor velodrome for some racing at least yearly. 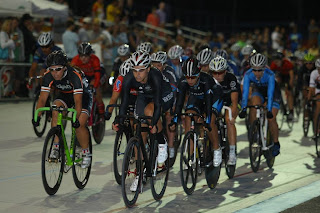 Photo from the Miss-N-Out at the Marymoor grand prix. That’s Rushlee Buchanan in the New Zealand skinsuit and Sarah Hammer right behind her in the Atomic skinsuit.
Posted by savage at 10:08 PM 1 comment:

Pat, Basse, Nick and Jen were out ripping up SFU
at the Cardiac Classic.  Full Results Here.
Photos courtesy of Jacob Murray. 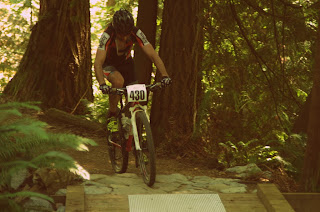 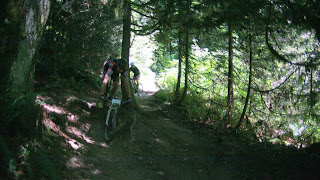 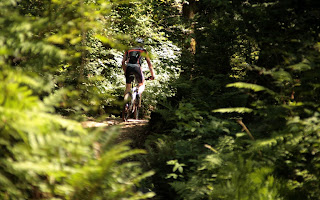 Basse heading into the woods. 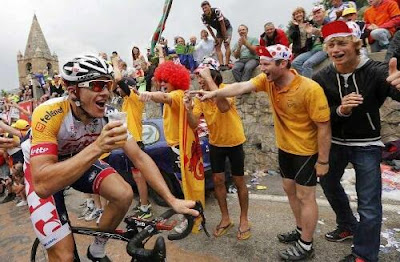 One of the hardest crits in N.America?
No problem, Quinn has it covered. 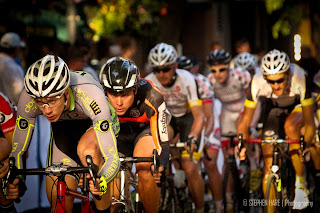 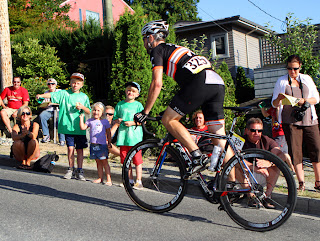 Ryan was 9th in the Cat 3 hill climb.
(Photo courtesy of Greg Descantes) 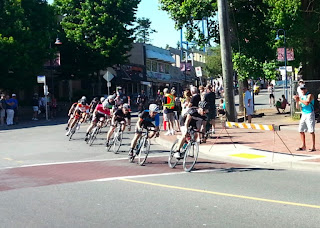 Hargrove leading the field en route to 5th in the Cat 3 crit. 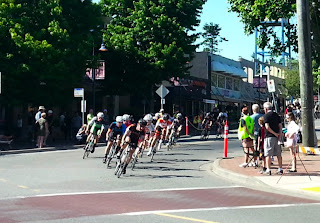 Summers stringing out the field after winning a prime.
He finished 6th in the Cat 3 crit. 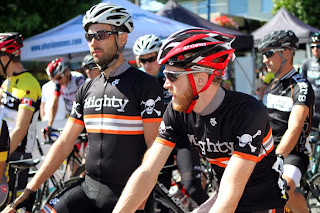 Ryan, Meat and Rob looking all 'serious business' before the crit.
(Photo courtesy of Greg Descantes) 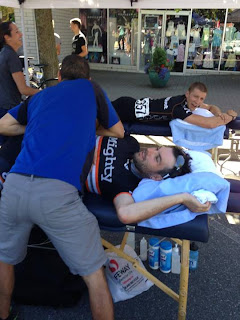 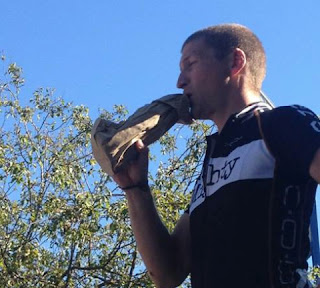 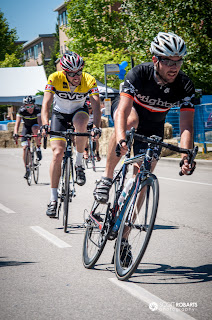 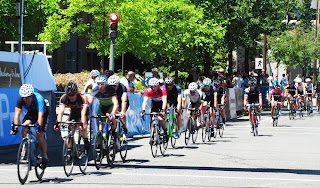 Summers and Rob in the strung out field.  Rob finished 16th. 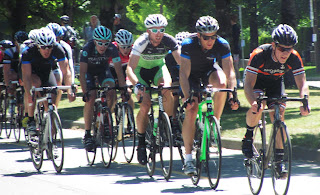 Posted by savage at 4:06 PM No comments: 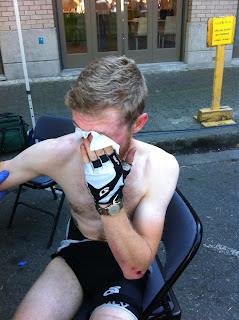 Don't be sad!  The stupor of Superweek is back and with it all sorts of fun.  Rob Hargrove overcooked the last corner but still finished up a strong 4th in the Cat 3 Delta crit on Saturday.

The carnage, er, racing continues all week with the UBC Gran Prix, Gastown, Giro di Burnaby and White Rock Stage Race.  Get out and enjoy some top level racing.

Posted by savage at 4:29 PM No comments: