Race season is right around the corner so Mighty decided on a little trip to work on the form. Some teams head south to warmer climes but there is nothing like some of the BC roads to harden you up. We piled into the vehicles and headed a few hours up to Lillooet where there is no such thing as a flat road and the winds test your mental toughness. Throw in a little gravel and snow and the Spring Series suddenly looks like a recovery ride... 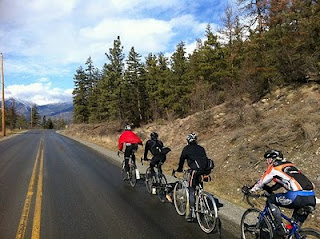 The sun was out as we hit the road on day one. 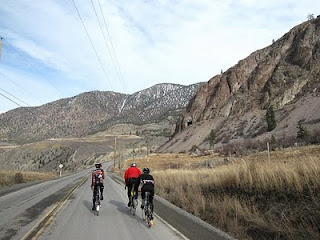 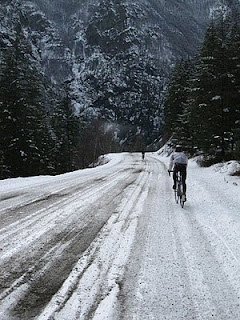 Day two was sunny but about 1.5 hours in the Bridge River valley gets a little shady and as the elevation gained, the white stuff was part of the day. 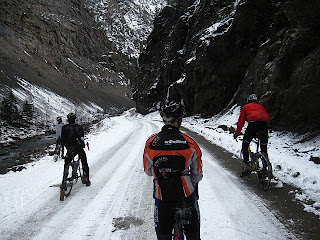 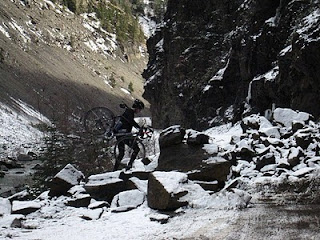 A little debris on the road doesn't stop any self-respecting CX team. 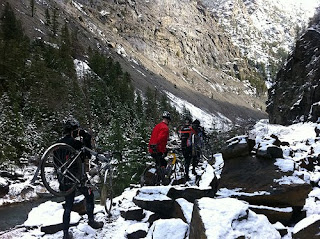 Quick, somebody teach me how to shoulder a bike. 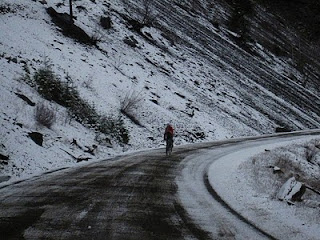 The climbing kept us warm. 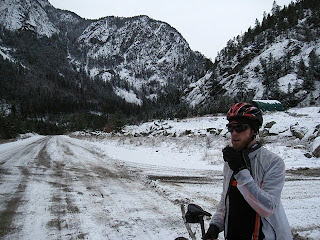 Meat pondering... The first dam and day two turn-aound point is right around the corner. 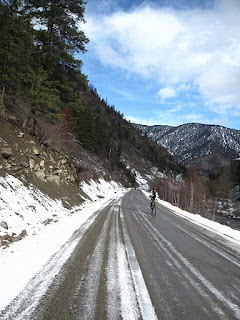 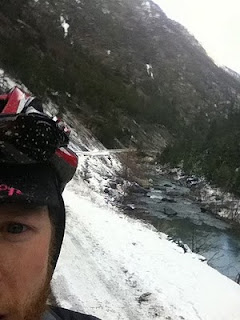 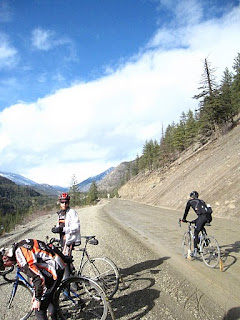 Earlier in the day two ride. The gravel roads were awesome. 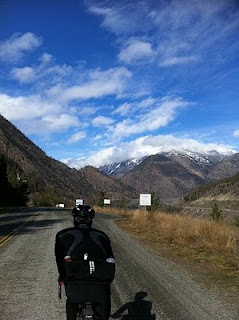 The view we enjoyed for the three days of Nick Berry leading us up all the climbs. But he was also our chef who kept us fueled for more punishment with incredibly tasty and healthy food. 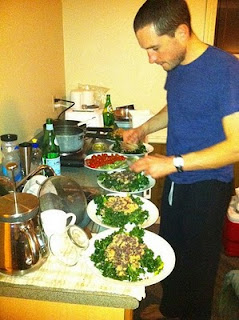 Just a mini-training camp but we are already trying to decide when we are going back. Most likely we will frequent the area a few times this spring/summer as the riding/scenery was incredible. Best part was in three days there were ZERO stop lights...

Haley, Jodi, myself, and the Sportsmans have signed up for the Nimby Fifty, a 35km Marathon XC race in Pemberton on Saturday May 28, 2011. There are only 300 spots so if you're interested in joining us, go here to register, quick!

Word on the street (or the trails?) is that the route is mostly singletrack, and much smoother than our local conditions. People have called it tougher than the Test of Metal because there's not as much time to rest (the Test's route uses a lot of gravel roads for climbing). Posted by morgman at 7:04 PM No comments:

Labels: XC racing to make you faster at cross

In February 2006, Lyle and Nick Towill came back with legendary stories from a race which had them ride the wrong way down Water Street in Gastown with 20 other people, and otherwise scramble around town on their old steel bikes. I was intrigued by the idea of a courier race, somewhat of a "day in the life" of a courier. At the time, my only bike was a 35 pound BMX, and it didn't go anywhere fast.

Fast-forward five years, when the following information comes our way:

The covered, yet unsheltered gazebo at Crab Park left something to be desired as the remnants of a cold front pushed their way through the city. As racers and volunteers filtered in and huddled around their bags of clothes, there was word that Jeff was running late. Being the longest running courier race in Vancouver history, I doubt this was a first.

The best way to stay warm is on your bike—and out of the rain. Nick and I headed for the tunnel at the west end of Waterfront, running loops up the hill to Cordova Street. Nick asked how I was feeling. My response: well-rested and well-fed; he had one of the two. Without explicitly saying so, it became clear that we would ride as much of the race as possible together. Both our cyclocross bikes were well-prepared with slick tires, fenders, lights, and a personal water supply.

I left Nick to ride over to Super Champion and tighten a screw on my front light. Jeff Curry rushed in the door and passed off the second round of manifests to Jamie and Nick. Back at Crab Park, everything was sorted less than an hour after the 3pm meet time.

After a hundred yard LeMans dash down a muddy hill, we retrieved our bikes from the beach and got on the road. First to the initial checkpoint and dropoff spot for the bag of clothes, Nick and I missed the address and looped the block, arriving with a rush of couriers to ascend a narrow staircase.

While others scrambled for their bikes on the side of Hastings and took off in all directions, Nick and I pulled out our manifests and did some strategizing. Twelve checkpoints scattered from railtown to south downtown, kitsilano, and deep in east van. Six picks and six drops, with a fair amount of distance to cover—this much was in our favour.

Fortunately the rain was letting off, leaving it its wake a strong and unpredictable wind. We decided on a counter-clockwise loop after knocking off the railtown pickups. On our way back through the downtown eastside, we crossed paths with many of the other racers frantically checking off their lists.

Finding volunteers to sign manifests turned out to be more of a challenge than finding racers, which isn't surprising considering the $500 prize for first place. After crossing to the south side of the Granville Bridge—one of the farthest points from the race's start—we reached the first of the three unmanned checkpoints.

We ran into another racer at that spot. Sarah had seen us at the Howe Street stop and wondered how we got to the south side so fast. Taking our picture with my phone to prove we'd been there, we were all headed in the same direction and took off east. Nick pulled out his first instance of the patented afterburner and pulled me along the next straight stretch, leaving our new companion to push her own wind.

32 blocks east, we reached the last of the unmanned checkpoints. Pulling out my cell phone to take a picture, we quickly remounted and bombed the hill back toward downtown. 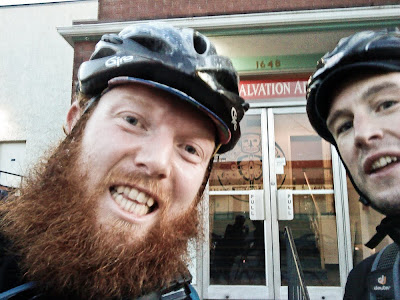 Arriving at Super Champion, the end of the first manifest, we found out we were in the lead so far. Excellent. Just the motivation we needed to keep hammering. The second manifest, which only the first ten racers would receive, had all the same checkpoints in a different order. We asked about the unmanned checkpoints, and were told to "figure it out."

Somewhat drained, I was not as quick at working out the order for our second loop. Nick ate a clif bar while I had a Berry-approved organic banana. We got heckled for strategizing instead of hammering. A couple of close stops down and we were on our way for another long haul. I felt the banana boosters kick in as we left the yaletown stops en route to the south foot of Howe and another trip over the Granville Bridge.

Along the way, we discussed the possible moral decisions regarding the unmanned checkpoints. Having the phone with us, we would be able to prove without a doubt that we visited all of the checkpoints both times. If someone took advantage of the system by skipping the farthest-out checkpoints on their second run, so be it. If we didn't leave this race with the purse, we would at least leave with our honour.

The wind had picked up and seemed to be coming directly sideways as we crossed the bridge. I was unable to catch any semblance of a draft, and struggled to keep Nick's wheel over the span's crest. Having not raced in 8 months and focusing more on technical riding than pushing my lactate thresholds in that time, I was suffering behind the man who really did succeed in using cross-country mountain biking as winter training a year earlier.

Arriving at our last unmanned checkpoint at 1st and Commercial, we only had a few more stops before we'd find out if there was another manifest or if the race was over. Like the saucy receptionists he spends his day serenading, Nick Towill asked us what the hell took us so long to arrive. He said Sarah had already been through with "more of that manifest completed than you guys have." Little did he know we were almost finished. Matt Barber had unsurprisingly left his checkpoint by the time we arrived.

With the last of our checkpoints finished, I asked Nick if he was going to leave me in his dust on the final stretch, as he most definitely had the ability to do. He assured me we would finish as a team. We'd been through this thing together, and the pot was so big that neither of us would complain about splitting it.

We appeared to have startled the group of couriers smoking outside as we rushed in to the finish at 245 Main. There was to be no third manifest, and we had arrived first. As long as our paperwork checked out, we would be declared victorious. Since both Nick and I have worked as couriers, we would also be eligible to keep the trophy dating to 1995 for the next year.

Here's a very rough map of the extent of the race, without the twists and turns of our exact route. This pegs our route at more than 30km, with almost 30 stops.

Jeff was very secretive about what black magic would determine the actual winner. In the past, he's been known to throw a wildcard in at the last minute, forcing racers to compete for the grand prize. What we did know is that we had hit all the checkpoints on both rounds, and got to the finish first. In any case we would not be accused of cheating to win, and my phone would be there to back us up just in case.

Upon receiving the 16-year-old trophy of concrete and bike parts at Pat's Pub, Nick gave a short speech about eating well and properly warming up before racing. We promptly bought a round of beers and split the rest of the cash. This could be my biggest prize haul all year, and it's only February. Along with the safe keeping of the trophy, we are now tasked with organizing the 2012 St. Valentine's Massacre.

I tried my best to keep Matt Hornland from making it to the Mighty ride in the morning. Nick would be there to update the team on the ongoings and unbelievable prize haul. Having taken Friday and Saturday off of trail riding, I was itching to get to the Shore. If you want to know what it takes to stay at the top of the cyclocross field year after year, don't look at what I'm doing. At least I can claim to be a part of a great team, and have a hunk of metal and concrete to remind me of it. 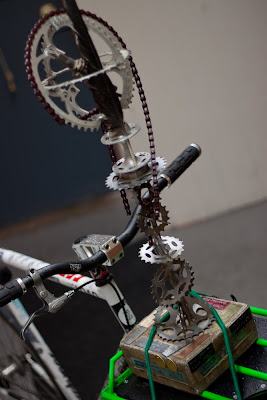 Labels: 500 dollars for less than two hours of riding

WHAT'S YOUR EXCUSE? YOU GOT A BROKEN HECKLE?

Posted by morgman at 9:54 PM No comments: