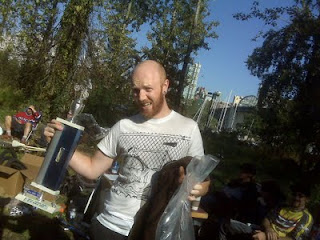 They call it Hell Track. Morgan owned it. Look at that trophy. And cold hard cash, merchandise and BEER was won. Perhaps it was all the cross dressing...
Posted by savage at 3:46 PM No comments:

Bill rep'd the Mighty colours well at the BC Summer Games in Richmond. He came home with all sorts of hardware: Silver in the HC, Gold in the RR, Silver in the TT. Great late season performance!
Posted by savage at 1:38 PM No comments: 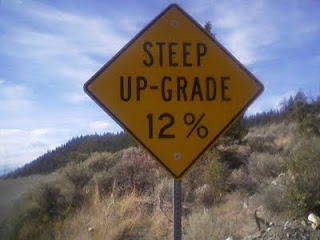 The best way to end your road season. 40k hill climb with 700 participants over two start times (recreational and competitive). Our very own Chris Squires showed some late season climbing form to post a 15th OVERALL. Awesome (especially for such an old man).
And big props to the crew that came down for the Cross 542 Race. Hayley won her women's race, Meat was second in his C group race and Morgan had one of the craziest closing sprints I have ever seen to finish second in the B's. The only low point of the weekend was the American beer.
Posted by savage at 1:26 PM No comments: