The road season is over so it's time for beer drinking, Cross Dressing and/or mountain biking.  Last weekend our friends hosted us at the Finnish Sporting Club's cabin on Shit Lake.  I did not make that up - translate Paska via google... 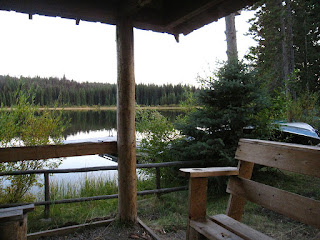 The view from the fire pit. 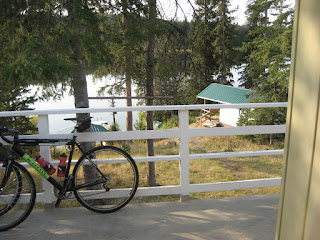 View from the kitchen.  The little green roofed hut is the sauna.
Apparently beer and 100° Celsius saunas are good pre-ride prep.
No, really. 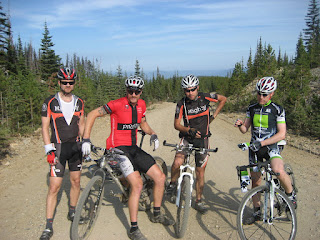 The cabin is actually at 1400m so the nice thing is the day starts with a 30k descent towards Kamloops.   This is us at the start of said descent:  Basse, myself, Ryan, and we had a celebrity guest appearance from one of the finest climber's in BC's history - Carl Jacobson (6 time BC Hill Climb Champ).  Basse's brother Rob also joined us and is behind the camera. 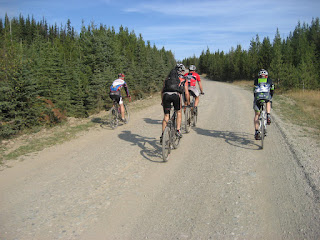 And they're off!  The view doesn't really come through the pics but there are amazing sight lines for miles around from here over the Thompson Valley and it's surrounding peaks. 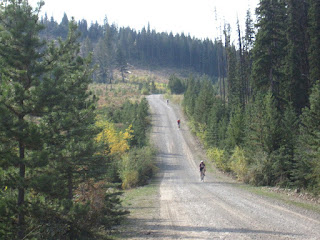 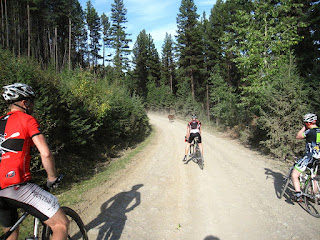 It is open rangeland and about half way down we came across a large herd on the road.
They are bigger so get the right-of-way. 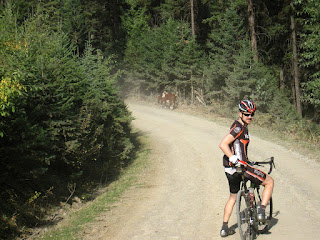 Bass yelling obscenities at them and informing them of their future on a dinner plate which seemed to cause them to move on. 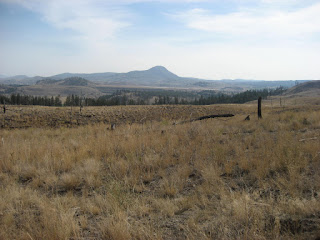 At the bottom you pop out in the open grasslands surrounding Kamloops.  We climbed back up via Lac Le Jeune.  Not many pics (we were cracking in the heat...) buy Ryan's Strava has all the deets. 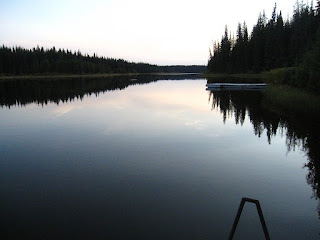 The view from the dock after a hard day.  Not shitty...

Posted by savage at 3:33 PM No comments:

Posted by savage at 1:45 PM No comments:

Every couple of years Tony Horn, a Race Director for WORCA(Whistler Off Road Cycling Association), puts on an event to try and find the best all-around mountain biker.  The last event was 2 years ago it was the 4 Queens. One of the Previous events was the 2006 Samurai of Singletrack,  it started by riding over the peak of Whistler and descending to the valley through 50 cm of snow.   The stuff of legends.
So when he 4 Kings was announced, it was a good goal to  see if I, and my bike, could handle it.  First, I had to get an entry,  I sat by the computer and was lucky to get in.  The event sold out in 17 min for a total of 150 spots, for the cost of one Mackenzie King.

The 4 Kings were : King Tubby Dub Master, Elvis The King , Richard Petty The King of Nascar, and King Kong. http://www.worca.com/events-a-programs/thefourkings.html 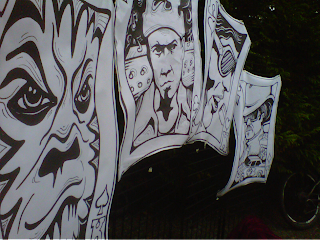 The first stage was the Dub in the Dark TT, a 14.5 km time trail around Lost Lake Trails, at night.  It was awesome.  There is something so incredible about riding at night on technical trails that has to be experienced. 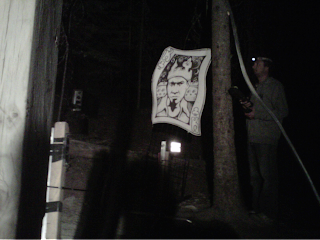 At the finishing gate.
I finished about 111 in  the GC on the day, not bad for an out of towner. 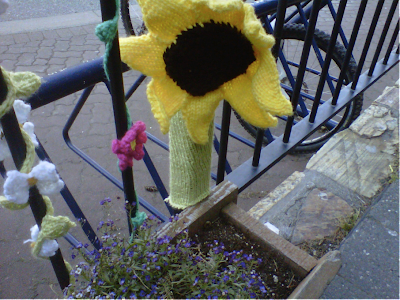 Requiste yarn bomb while having breakfast 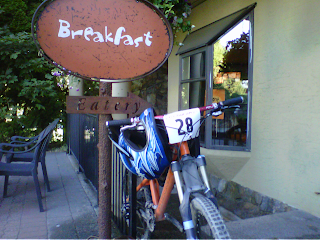 Full face Helmet ready for the Elvis,  All shook up DH.  Gone Bakery kept me fed over the weekend.
I took 2 practice runs in the bike park prior to my race. It was needed and I was rusty with my landings.
After scooting my way down Schleyer-Lower Whistler dh- Detroit Rock City, my run landed me in 114th on the GC 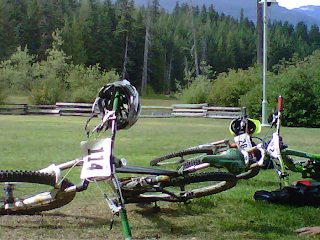 It was time to rest before the afternoon Enduro Stage 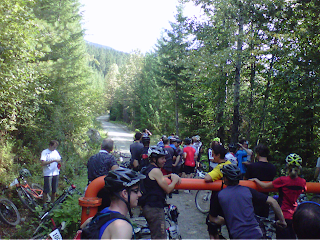 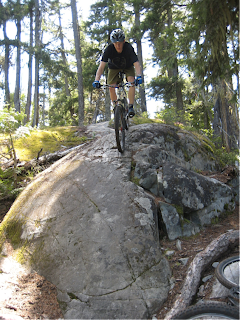 Foreplay was the supposed reward, but I had a bad line choice on one of the rock rolls like this one.  I was rewarded with a torn rear tire casing and a last place in my group.  (Oh the rider isn’t me BTW) 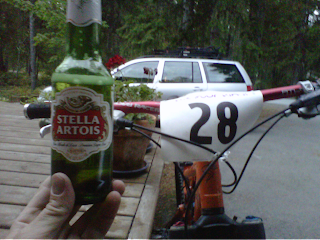 My reward for fixing my tire, but I should have checked my brake pads, more on that later.

So onward and upward for the last stage.  King Kong, a 48 km epic though the best and hardest trails in Whistler. The plan: Gondola to the Roundhouse, ride over the peak down to the valley, up and down the Westside trails 3 times and travel the length of Whistler to get to the beer in one piece 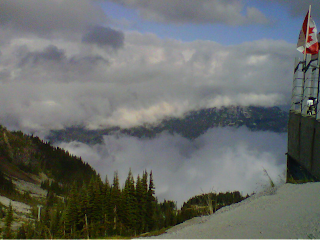 As stated earlier the last time Tony had a race go over the peak it was snowing. 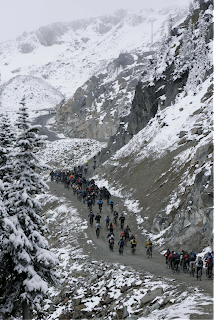 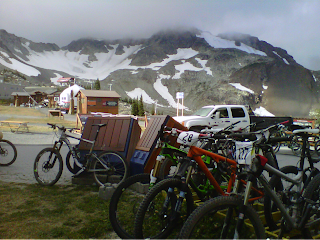 Better weather but the peak was cloudy. 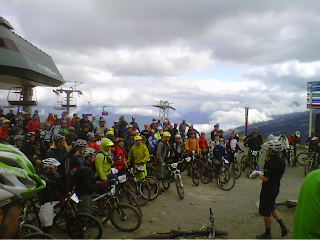 Tony(the organizer) giving a pre race briefing, and thanks to the racers and Trail Builders. 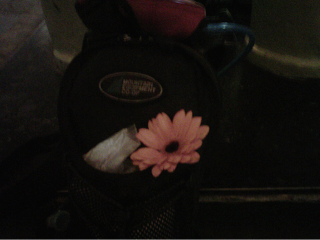 We all carried a flower to the trail Business Time, and a tribute to Whistler Local Duncan McKenzie.

I became preoccupied with my own issues when I reached the top of the Peak and realized that my front brake pads were glazed over and near useless.  After descending to the valley below with only a rear brake, I was considering quitting the race.  But with a lot of climbing ahead I made the best of it, and was rewarded.  At the top of Section 4, a gnarly descent in the trees, a course marshal offered the pads off of his bike and I was excited to rip all the way to the finish.  48km in 7hours,  lot of the best and most technical trails I have ever rode in my life. 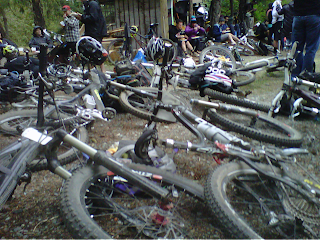 Bikes and riders enjoying the after effects of a good day out, and a well-deserved beer.  The gelato and beef brisket flowed like water, as well as the Phillips beers.

I was done, and feeling like a king after having a full on beat down with my bike all day. 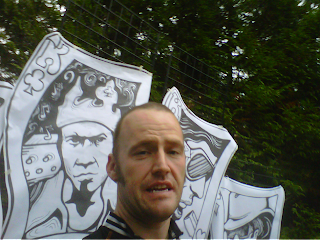 If the 4 Aces ever comes around, I will be there.   One race for ages, and truly an epic weekend. 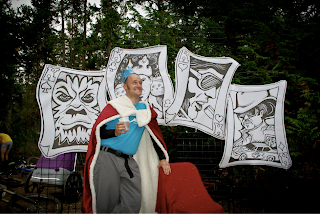 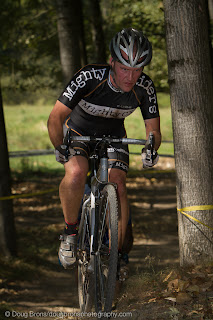 Mighty was out volunteering at the first CX race of the year and also putting the hurt on.  Ashley took the singlespeed category.  For a FULL REPORT, CLICK HERE.  A great day on the farm!
Posted by savage at 8:55 AM No comments: