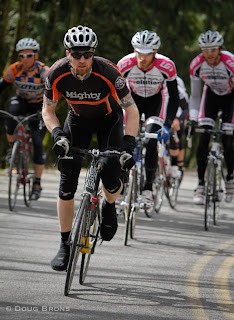 SSS leading an A group up the Aldergrove climb. Photo by Doug Brons. More here.
Posted by gowlin at 9:17 AM No comments:

Yesterday morning—and I use the word "morning" quite loosely—we headed up to Mt. Fromme to take advantage of the beautiful spring weather. Matt's on the verge of building a shore-friendly hardtail, so I wanted to take him up for some one-on-one work on my Brodie Catalyst.

This is the Pimp Coaster on Lower Crippler. It was in a state of disrepair until a few months ago, but now it's open for business. Matt surveyed the scene, and decided to go for it. 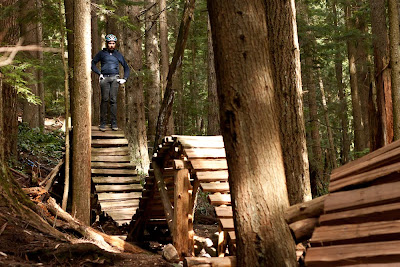 With a sleeve full of BMX skills, Matt dropped his front wheel over the edge and committed to the coaster. 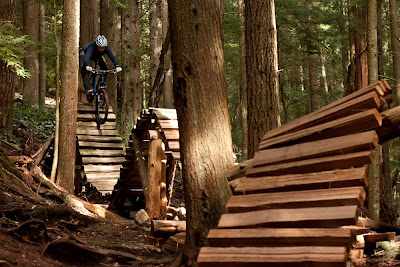 The point of no return.

And with a second to re-focus, I caught him coming over the last hump squirrelly and stoked! 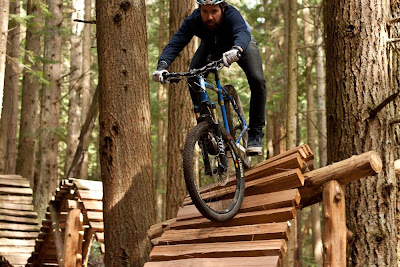 Matt was also nice enough to take my camera while I hit this massive plank to rock face on Expresso. He clicked the shutter just at the right time! 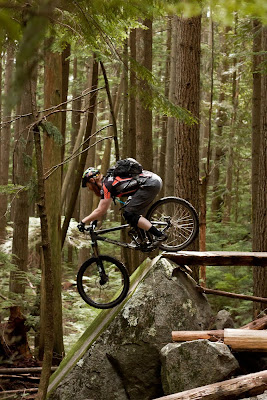 Light of god, beard of god.

This weekend we're setting out to pre-ride the course for next week's FVMBA Toonie race out at Sumas Mountain, while the road kids hit up what's said to be the best course in the Spring Series.
Posted by morgman at 7:14 PM 2 comments:

Labels: more mountain bikes with mighty kids are you sick of this yet?

Airtime of the Week: Haley!

Star of the day, Haley gets airborne up on Mt. Fromme. We're doing some changes on her bike to increase confidence, and it looks like it's working! 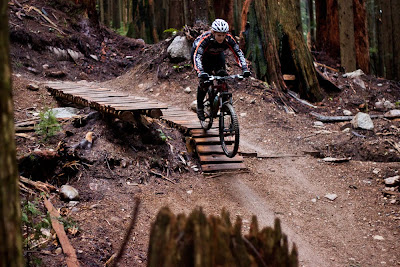 Whenever that happens, I make them do it again for another photo. Turbo boostage, and good form too! 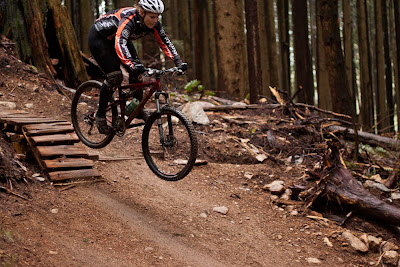 And here she is with Jodi laughing about live emailing the proof to Matt Barber. Sorry if she misses the team ride in the morning... we might just have to steal away to the trails again. 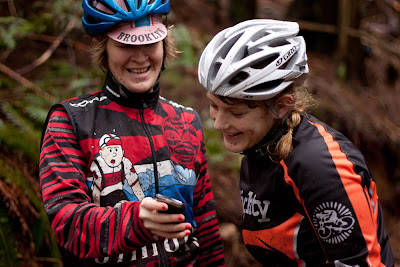 The past week's weather left Mission's Heritage Park clear of snow but greasy as all hell. A temperature inversion had us driving through fog all the way from Port Coquitlam through Maple Ridge, but the skies parted just in time for our 8:30 arrival. With 90 minutes before race time, Haley, Jodi and myself registered and set out on a recon lap as Nick B and our honourary teammate Omar were getting sorted. 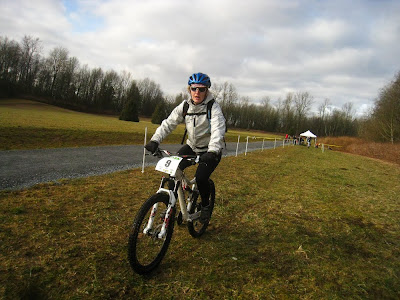 I think I just about killed Haley. The warm-up lap was our first taste of Heritage Park's trails, and the climbs turned out to be steep and slippery. Fast forward to 20 minutes before race time, and it seemed like we were farther from the start line than at any point in the past 40. We asked the marshals at the top of the worst climb yet which was the fastest way back. They pointed us down Corrie's Corners, the descent of Lap 2, steep and gnarly enough to have me behind the seat of my resurrected steel Brodie hardtail. 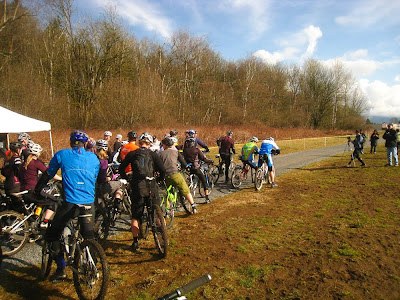 Feeling bad about leading the girls on such a treacherous warm-up, we arrived as the field was lining up. There would be no time to ride to the car for the pre-race organic banana that Dr. Berry would prescrible. The field was in good spirits in the late winter sun, and we each lined up behind the people who looked faster than us. A very large cowbell sounded the start, and we were off on the gravel path out-and-back to spread out the pack.

The vast majority of the race course was tight, flowy singletrack without much room to pass, so Nick and I pushed hard to gain as many positions as possible in the gravel hammerfest. As expected, I lost sight of Nick before the singletrack began, but felt OK with my position somewhere near the front. Omar didn't have such good luck, though. 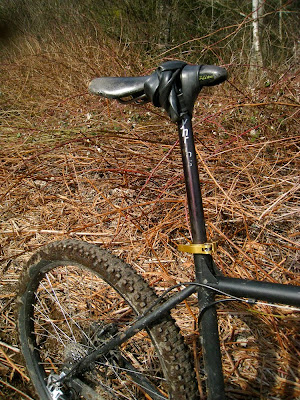 As soon as he hit a bump on the singletrack, the head of his vintage Syncros seat post blew apart and he was forced to head back to the start and figure something out. With memories of helping the inventive street cyclists at Our Community Bikes, he tied his Flite to the post stub and headed back out to the course. The result? I solid mid-pack showing on his Chromag Samurai, and the unspoken award for most hardcore performance. (Ironically, Nick thinks he may have donated that ill-fated post to OCB.) 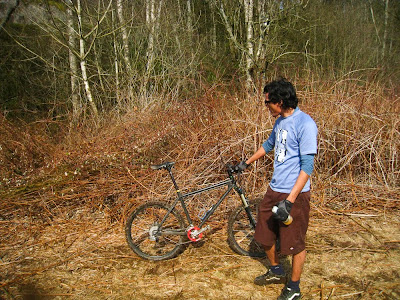 In her first race as a Mighty team member, Jodi made the sensible choice to keep the heavy, but grippy downhill tire on the front of her Brodie Ethos. Her technical riding background paid off on today's course, and apparently the 2.7 pound tire didn't hold her back too much as she finished mid-pack with a smile on her face. 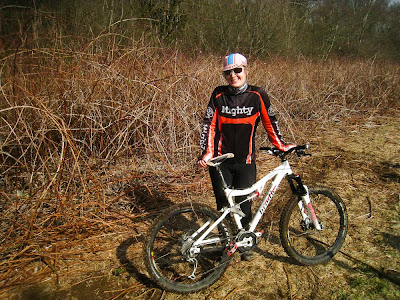 With a few weeks off the trails, Haley was sure to be challenged by todays course even without my death march warm-up lap. In a discipline of riding that's kicking her ass into learning technical skills beyond the cross course, Haley's efforts are awesome to say the least. She came through with a classy victory salute finishing her first ever mountain bike race. 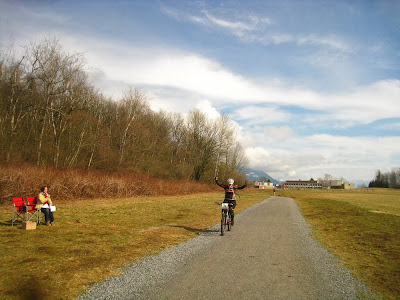 My own race went quite well. After the pack settled out, I lost a few spots and gained a few spots in the first series of climbs, but stayed within the top 15 as far as I could tell. I was on pace with the highly skilled Jean-Ann Berkenpas of the Local Ride crew, and a guy on an Orbea 29er that could not keep his bike upright whenever the trails went downhill. Jean-Ann and I were riding well together, and we even enjoyed a good conversation as the first lap's climbs subsided.

After a ball-busting trip off the trail right in front of Jean-Ann at the end of Lap 1, I had hoped to make up some time on the gnarly descent we'd ridden just before the race start. However, I was losing steam and slowly made my way up the steep climb to the top. I passed a guy who was riding single speed after a malfunction, and rode it out to the finish solo. On the final pitch, I swear I surfed my bike on its side more than rode it, but made it out unscathed. The bike that was supposed to introduce me to XC racing had finally laid tracks on a local course. 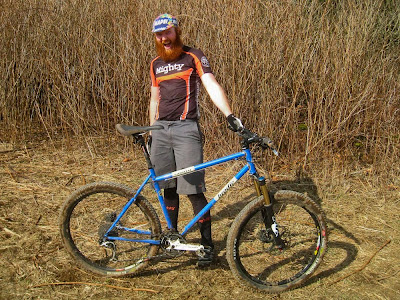 Ever-complaining about his Jamis XC machine's noodly feel, our hero Nick Berry was neck-and-neck with the eventual race winner until a blunder on a technical section (wasn't that the whole race?) allowed his rival to pull a gap that never closed. Nick ended up with a very respectable 2nd place finish, just 30 seconds behind the leader over a 43 minute span. Back in his street gear, our number one stunna was all full of attitude. 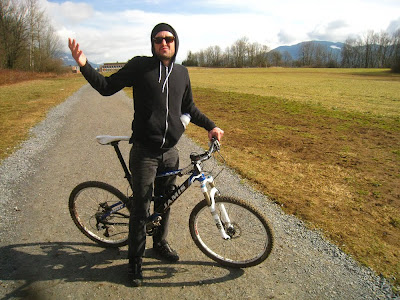 The post-race beers, bananas, and banana bread were well-deserved, and we later won beer cozies for our efforts at the finish line. 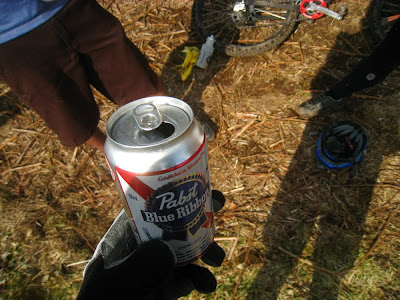 Here we have Nick with possibly my worst podium shot of all time, winning back twice his race entry (a cold four dollars) and a water bottle that says "Put Some Fun Between Your Legs." Nick also ended up taking home a pair of spd shoes in size 10.5 after out-guessing myself and some locals in a Fraser Valley mountain bike-specific trivia contest. 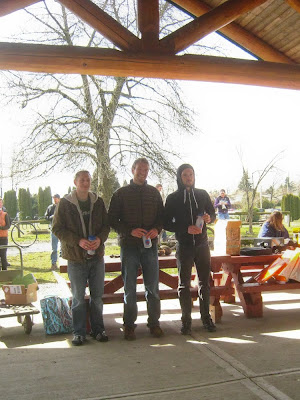 The first of the FVMBA's Toonie series gave us with great weather, amazing smooth singletrack, and a good time with a bunch of good people. At 2 bucks a race, you can bet we'll be out at the next race on Sumas Mountain, Sunday April 3.
Posted by morgman at 10:14 PM 5 comments: